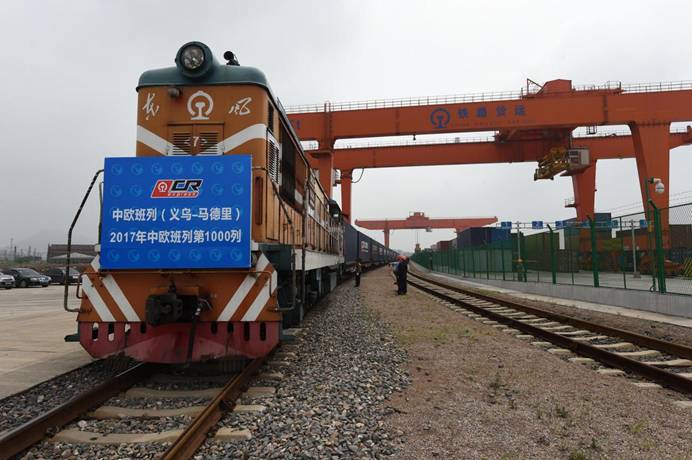 Carting small commodities, clothing and other goods, China-Europe Railway Express No. X8024 (Yiwu-Madrid) trundled out of Yiwu West Station on May 13, 2017, a day before the Belt and Road Forum for International Cooperation kicked off. It was embarking on the 1,000th trip along the railroad freight line this year. A total of 612 more trips have been seen this year, up 158% compared with the same period last year.

The Belt and Road cooperation initiative on trade connectivity launched by China together with some 60 countries and international organizations on May 14 have told the world their determination to support economic globalization.

The paper, an outcome document of the ongoing Belt and Road Forum for International Cooperation, is also an effort to implement Chinese President Xi Jinping’s call to build an open world economy at the opening speech of the forum, said Zhong Shan, head of the Ministry of Commerce, also an initiator of the document.

In his speech, Xi reiterated the proposition to build a broad community of shared interests by upholding and growing an open world economy, creating an environment that will facilitate opening up and development, and establishing a fair, equitable and transparent system of international trade and investment rules.

The Chinese stance and proposition delivered by Xi was praised by the delegates and the international community, Zhong said, adding that the newly-launched initiative on trade connectivity was also seen as a step to pool wide consensus, deepen economic and trade cooperation and push forward the Belt and Road construction with joint efforts.

The minister elaborated three aspects that will be prioritized when implementing the plan.

First of all, Belt and Road should be built into an open route by persisting on the Silk Road spirit, working together through consultation to meet the interests of all, putting heads together and pooling consensus, he said.

The route is scheduled to be constructed into an open platform to promote cooperation and build an open world economy, Zhong explained.

The third is to give full play to the role of trade in boosting economic growth, maintain the multilateral trade system, accelerate the construction of free trade zones, push ahead with free and convenient trade and investment, and seek an open, inclusive, all-benefited, balanced and win-win economic globalization, the minister added.

The initiative stemmed from the common wish of all parties to promote the Belt and Road construction, Zhong said, adding that it reflects their shared aspiration to pursue integration, high-efficiency, win-win outcome and development, as well as the joint action to boost trade growth, two-way investment and inclusive and sustainable development.

The initiative, as an important outcome document to gather strength, seek for the truth and deal with concrete challenges, will lead the world to forge ahead, the minister pointed out.

As one important outcome of the forum, the initiative has up to now received response from more than 60 countries and international organizations, and will embrace more participants and supporters in future, Zhong said.

The positive momentum indicates the common wish of the participants to support economic globalization and promote free and convenient trade and investment, he added.

It has also demonstrated China's rising international status and influence as well as the popularity of the Belt and Road Initiative among the international community, the minister concluded.